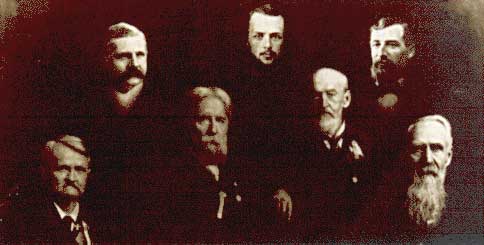 The spirit that ruled over and swept through Miami, away back in the fifties of the last century, is indescribable. It was not belligerent nor contentious. There was courtesy and genuine kindness that showed itself in words and deeds on every hand. There was no malice or uncharitableness nor any spirit of envy and hatred. But there was that strong spirit of personal independence, that devotion to what the student mind received and accepted as principle, that spirit, in fine, which carried the nation North and South through the terrific trials of four years’ fratricidal war. This spirit showed in the literary societies, in the birth and growth of Greek-letter fraternities – showed on the playground and in intercourse of the students with the people of Oxford and the neighboring towns. Some students displayed this spirit with more energy than others, but it was part of the mental makeup of each and every one and to it most of us owe whatever of success in life we have won.


There were three literary societies in Miami in 1854. The Erodelphian – in my day the strongest and numbering among its members the ablest of the student body; the Miami Union – a good, hard-working body that included many that have since become noted men; the Eccrittean, an offshoot of the Miami Union, born of the spirit of independence that I have endeavored to describe above. The interest taken in these societies was intense, the work done in essay-writing and debating of the very highest value. To be elected to represent your society at the Junior Fall Exhibition, either as poet or orator, was the highest and most coveted of all college honors.


Isaac M. Jordan (afterward a distinguished Cincinnati lawyer and politician), together with a number of other youths…. came to Miami from Geneva Hall, a Covenanter academy of the strictest sort, where we were drilled in the rudiments of a classical education six days of the week…. Jordan and I were “hayseeds” of the pronounced type, green country boys whose fitness for a first-class fraternity would not in these times of wealth and style be considered for a moment. Whtelaw Reid was, however, prince and premier; he sized us up and discounted our possible future. Jordan took part in a debate in Erodelphian Hall and I read an essay. Both of us had been carefully trained in the Covenanter academy and profited a little, perhaps, by the training. So we were taken into the Delta Kappa Epsilon Fraternity. The first time I ever spoke to Reid, as I remember, was when he came to our room to inform Jordan and me that this honor had been conferred upon us. We accepted promptly. There was no “rushing” in that day. In deep secrecy the honor was conferred and in the night time it was announced. Neither Jordan nor I had any idea what the Delta Kappa Epsilon might be or what its aims and objects for existence were.


Mr. Reid was a distinguished upper classman – a Junior at the time – and we looked up to him with reverence and awe. This was intuition on our part and our conclusions were right. Reid was worthy of confidence and was an excellent counselor. I came to have a warm affection for him, frequented his room a great deal, and he tolerated my visits, which were visitations in the most kindly spirit.

In the meantime we went to the secret conclaves of our chapter, committed the constitution and by-laws to memory, but learned little about the real spirit and aims of the fraternity. By and by came on the election of the orator and poet for the Junior exhibition positions, as I have said hereinbefore, highly prized. Omar Newman, a member of our chapter, was one of the candidates for poet. James P. Caldwell, Franklin Scobey (both of whom had been initiated into the Delta Kappa Epsilon about the same time that I was initiated), Jordan, and I voted for the rival candidate and Newman was thereby defeated.


Now we had not the least idea that we were under any obligations to vote for Newman. No fraternity spirit had been developed in our minds. We simply exercised what we considered our right of choice and were not conscious of giving offense to our fraternity brother or anyone else. We remained in this state of ignorance for some time, I do not remember how long. Mr. Reid was deeply offended, but he did not shoe his feeling to any of the new members of the chapter. In addition to the four mentioned hereinbefore, D. W. Cooper and Thomas C. Bell (members of the Eddrittean Society ) had been initiated. Ignorant of conditions and without knowledge of the feeling rife among the older members, and with the kindest intentions, the new brothers determined to give a dinner in their honor.


I remember that the feast was prepared at the village restaurant, the guests invited, and on the appointed night the newly initiated gathered and waited for their guests. They did not come for a long time, and then only Mr. Reid and with a stranger. Ried had not at that time the grand confidence in himself that afterward made him fit to stand before lords and kings, and since he was determined on severe measures, he took into his confidence Minor Millikin (an alumnus of the fraternity, and afterward a gallant officer of volunteers, killed in battle) and the two decided on strenuous proceedings.


Suddenly, and without warning, these two gentlemen appeared, stepped inside the door, and Millikin began his speech. All that I rememb er of that momentous utterance was: “My name is Minor Millikin; I live in Hamilton. I am a man of few words.” It seems that no one present was ever able to recall what further was said by Millikin, but whatever it was it was profoundly effective. He plunged his flaming torch of oratory into a powder barrel and the explosion awoke the echoes instanter.


The meeting broke up in disorder and the banquet remained untouched. Now, had Mr. Reid spoken for himself, had he reasoned with the offenders in a body or one by one, he would have had a respectful and brotherly hearing and the great probability is that peace would have followed and no Sigma Chi Fraternity would have come into being. It was Whielaw Reid’s one mistake and he never made another of the kind. Mr. Reid and his associates who were loyal to the old fraternity saw the work of building up the new organization go on without hostile comment. We associated together much as before. Mr. Reid and his companions acted the gentlemen throughout. It was not in his nature to do anything else.